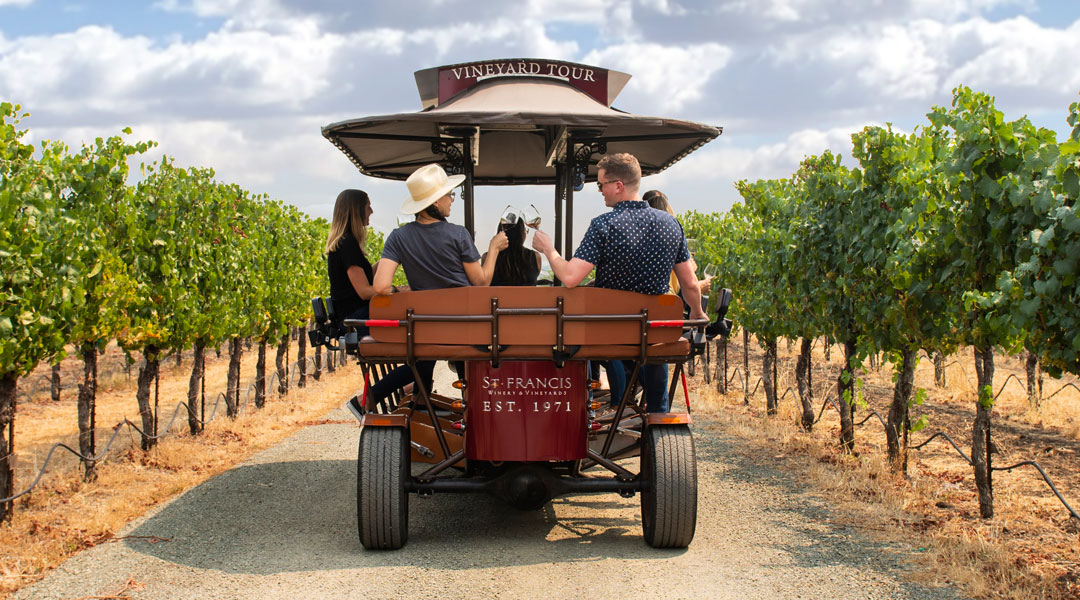 Remember to TAG us!

Stay seated and buckled at all times while the trolley is in motion. Please keep your belongings secure.

Our stunning mission inspired Visitors Center and Tasting Room were opened in 2001. The iconic bell tower is adorned with a functioning 1000 lb bronze, custom cast bell, commissioned with the Marinelli Foundry, the oldest foundry in Italy and the official bell maker of the Vatican since the Twelfth Century.

A grand dedication ceremony was held in the Piazza Della Basilica of St. Francis of Assisi, Italy in 2000 before the bell was shipped to the United States. Today you can hear the bell ring every hour throughout the day from almost anywhere in the valley.

Wild Oak Estate Vineyard, established in 1981 is located on the western end of the Sonoma Valley at the foot of Hood Mountain and Sugarloaf Ridge. The unique terroir of the vineyard, with its volcanic rock and gravel that has washed down from the Mayacamas mountain range over millenia provides ideal soil structure for small yields of concentrated fruit.

An array of grape varieties are grown on this 133 acre property, giving it the nickname “the Spice Rack”. The vineyard provides ideal conditions for everything from Chardonnay on the lower slope, Zinfandel and Petite Sirah on the eastern block to Cabernet Sauvignon higher in the vineyard. The natural south-facing slope of the vineyard allows for both ample sun exposure as well as unused rain water to filter back into the local watershed. 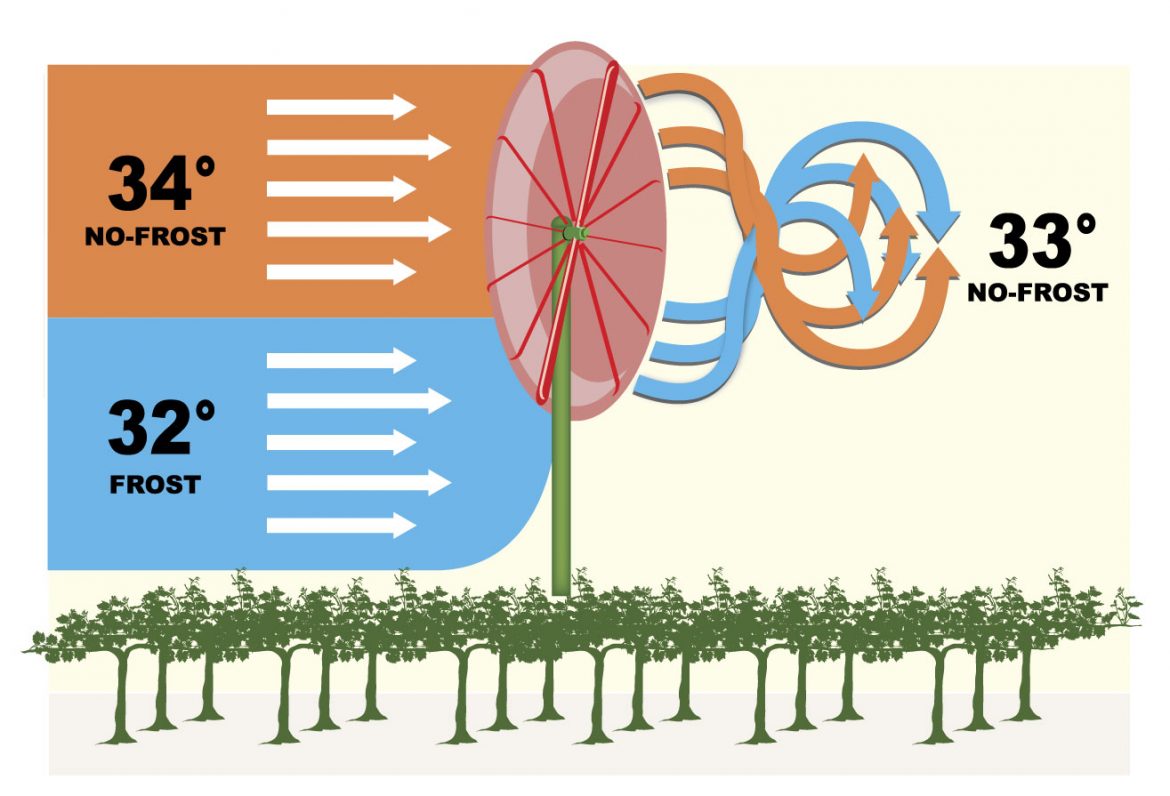 What grape is that? 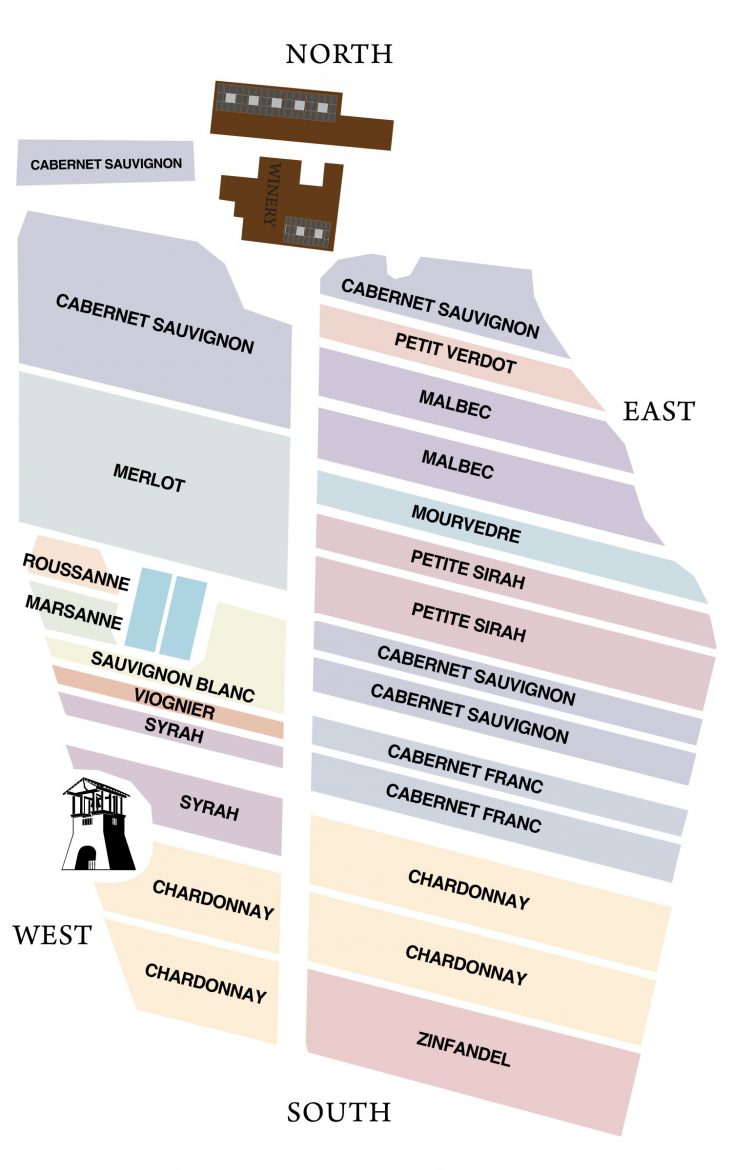 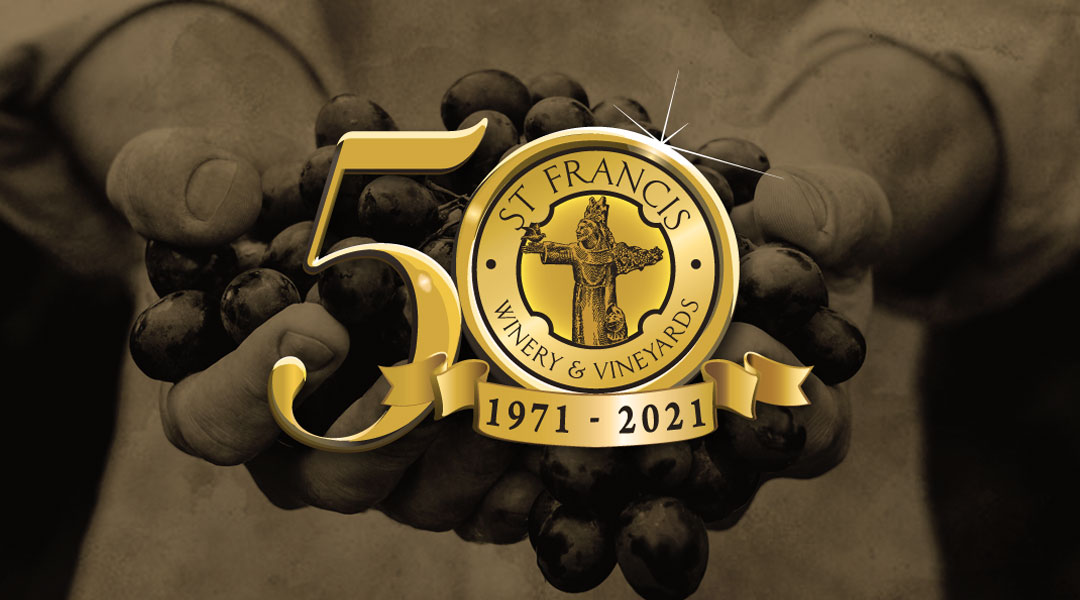 Just east of our Tasting Room, roughly a half-mile down the Sonoma Highway in the town of Kenwood you will find Behler Vineyard. This remarkable valley floor vineyard is where our story began.
Read More
In 1971, businessman and San Francisco transplant, Joe Martin purchased 82-acres of this beautiful Sonoma Valley ranch. Martin spent his first season as a vintner replanting the existing vineyard rows from traditional German varieties to Chardonnay and Merlot. A bold move at the time, Martin is now credited with planting some of the first Merlot vines in the Sonoma Valley.

Martin and his business partner Loyd Canton went on to sell their first harvests to local winemakers under the business name St. Francis Vineyards. A name Martin had chosen as an homage to the Franciscan Missionaries credited with planting the first grapes in the region in the mid-1800s. With St. Francis also being the Patron Saint of Nature and Ecology, the moniker also represented his pledge to safeguard and preserve the splendor of the region for future generations.

Chris oversees production of our Cabernet Sauvignon and other Bordeaux varietals, as well as our popular Sauvignon Blanc. His goal is to create wines that are approachable, yet compelling, and always a true expression of Sonoma County.

Next to the Herb Garden You will notice four head pruned, heritage vines. These are Merlot vines that were transplanted from our Behler Vineyard just up the road in Kenwood. They no longer produce much fruit if any, but act as a constant reminder of our roots here in Sonoma Valley.

Across the creek is our 2 acre, organic, culinary gardens. Planted in 2012, this seasonally changing garden provides fresh produce to our esteemed culinary programs. Executive Chef Peter Janiak recently introduced a row of fruit trees to the garden with plans to incorporate more Estate sourced fruits to our delectable pairing menus.

Plan your next visit! 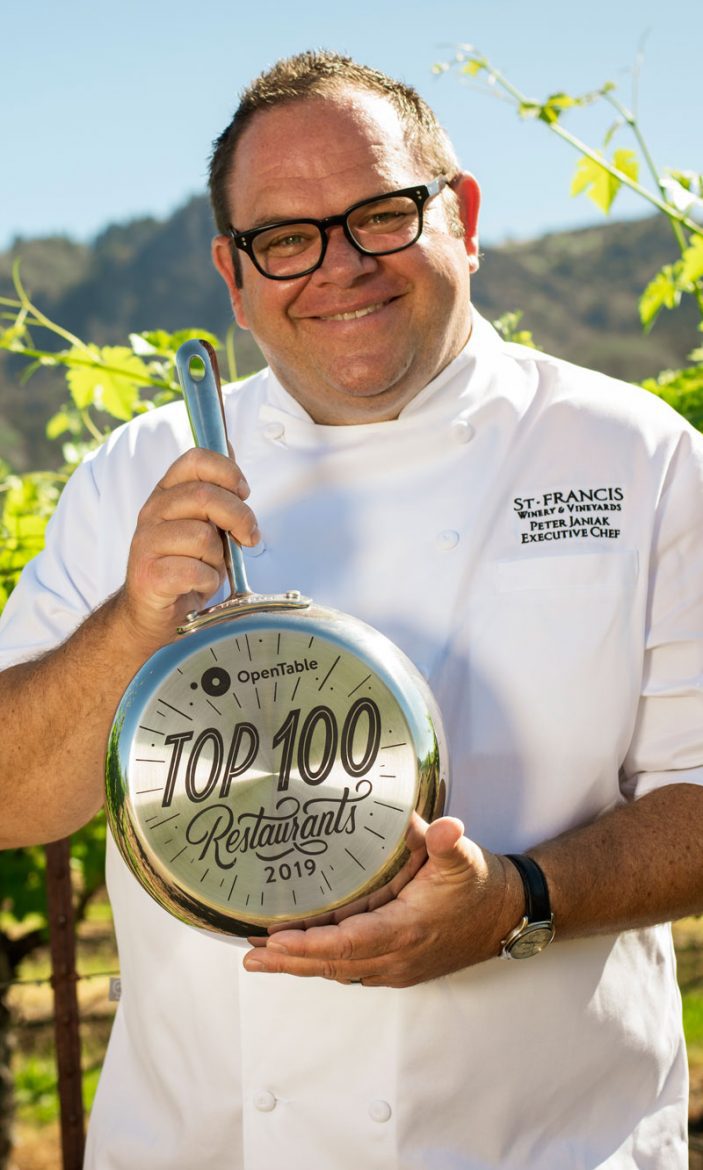 An American Viticultural Area, or AVA, is a specific agricultural region based on geographic location and climate variations. Sonoma County AVAs are often compared to France’s wine appellation system.

You are in the 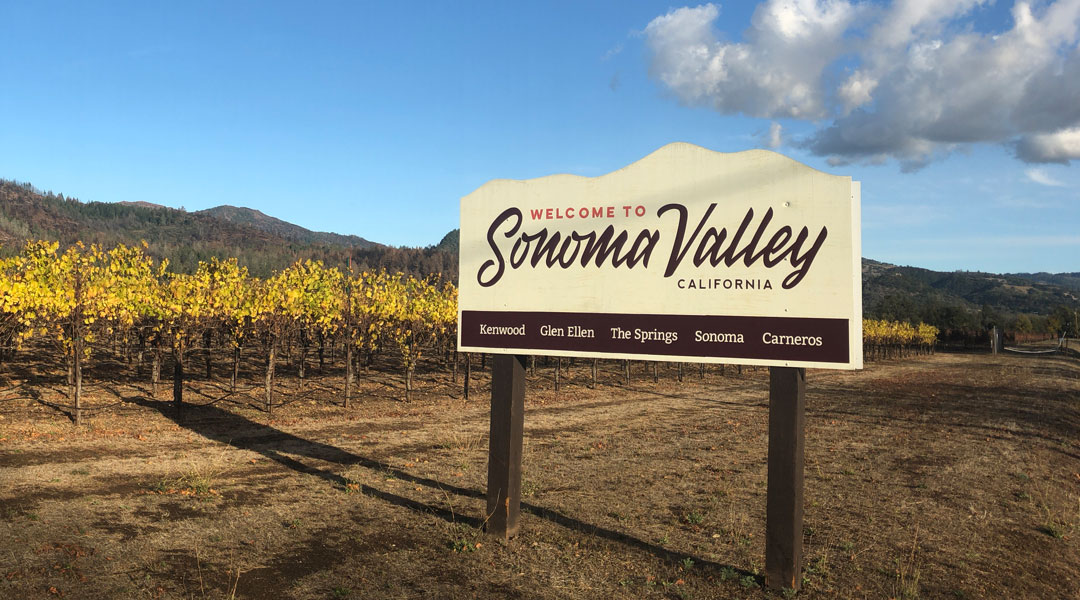 Sonoma Valley earned official American Viticulture Area status (AVA or appellation) in 1981. It comprises 10,249 acres of vineyards, and is home to more than 80 wineries and tasting rooms. Sunny days are something Sonoma County has in plenty. With an average of 262 sunny days per year, Sonoma County boasts some of the most radiant weather in the country. Mother nature, fortunately, balances the region with an average of 31 inches of rain annually and presents minimal frost in late winter. These conditions couldn’t be more ideal for growing an array of opulent fruit, perfectly balanced for making outstanding wine.

Read More
Sunny days are something Sonoma County has in plenty. With an average of 262 sunny days per year, Sonoma County boasts some of the most radiant weather in the country. Mother nature, fortunately, balances the region with an average of 31 inches of rain annually and presents minimal frost in late winter. These conditions couldn’t be more ideal for growing an array of opulent fruit, perfectly balanced for making outstanding wine.

The warm Summer days in Sonoma County tend to see a bank of cold fog resting just off shore in the Pacific ocean. A cold breeze typically accompanies this looming moisture this time of year. Visitors expecting to find a hot sunny day at the beach are quite often deceived by inland temperatures that reach into the 90’s. They arrive to find temperatures at the coast closer to 50˚, leaving them wishing for hoodies or scarves.

At about 5pm, like clockwork each evening, a cold stiff wind starts to pull inland from the coast, swarming the valleys and lower hills with a blanket of cooling fog. Because of the varied topography the same areas see a decrease in temperature in roughly the same order each night. Regions bordering bodies of water such as the Pacific Ocean, Russian River and San Pablo Bay see temperatures drop first. By about 9 PM temperatures have dropped across the county to around 53˚F – 65˚F, with some of the higher elevation mountains seeing a slower depletion of the day’s warmth.

This cooling of the vines slows the ripening process at the molecular level allowing flavors to develop, acidity to increase and sugars to balance. The next day the cooling fog rolls back out to the ocean in the opposite the way it arrived. Areas that were blanketed last are the first to begin warming, while others reach peak temperatures later in the day. Considered a Cool Climate region, Sonoma Valley’s unique geographic orientation capitalizes on these reliable patterns. Fog pulling inland from the ocean flows eastward connecting with even more fog being pushed in a north-western direction up from the San Pablo bay on the opposite end of the valley. This dynamic transition allows these east-county vineyards to experience extensive sun exposure with a steep decrease in temperatures late in the day. 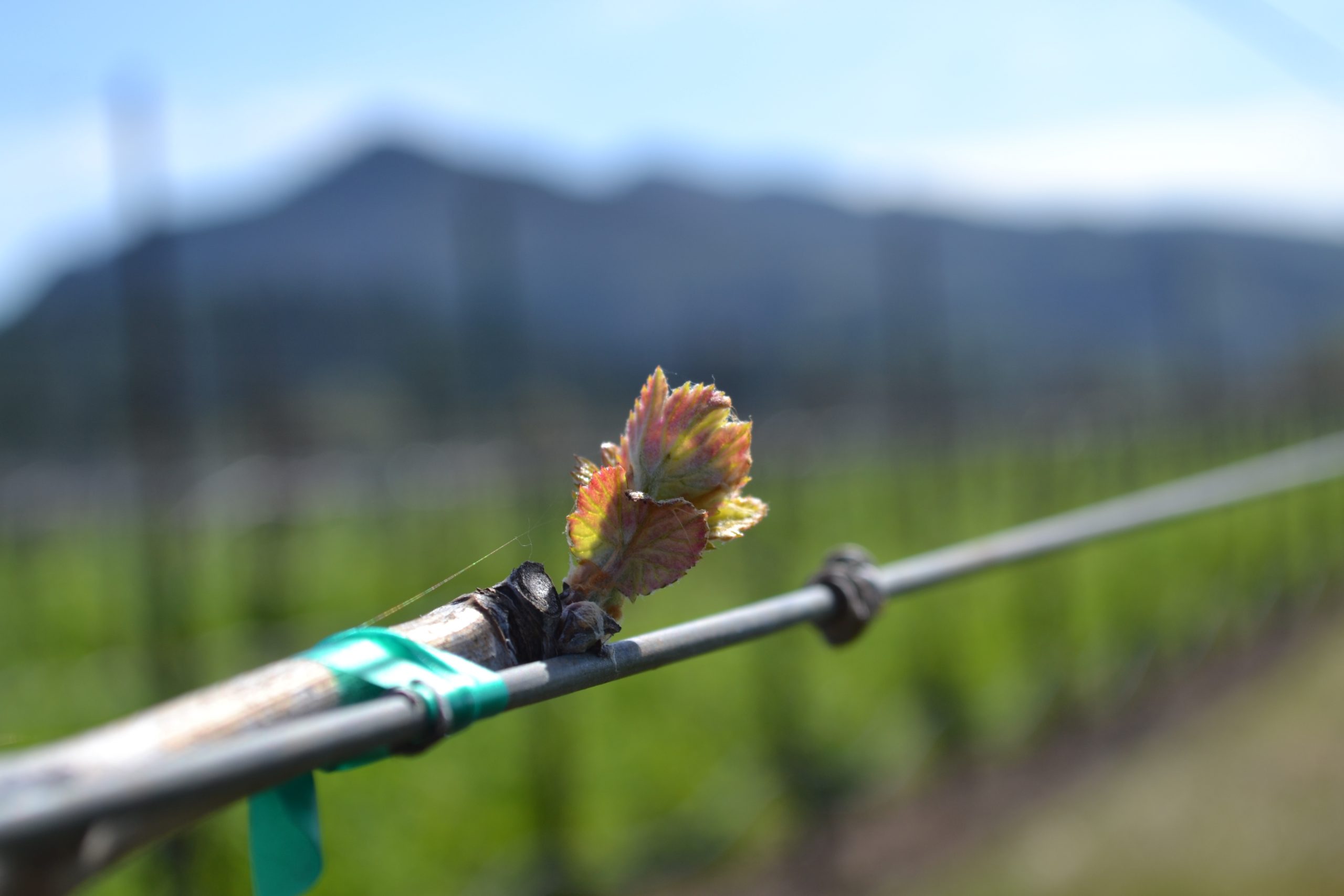 The vines awaken from their winter dormancy. Buds grow quickly and become a dense canopy of shoots, leaves and grape clusters. Bloom occurs in May when the clusters of tiny flowers transform into grapes. 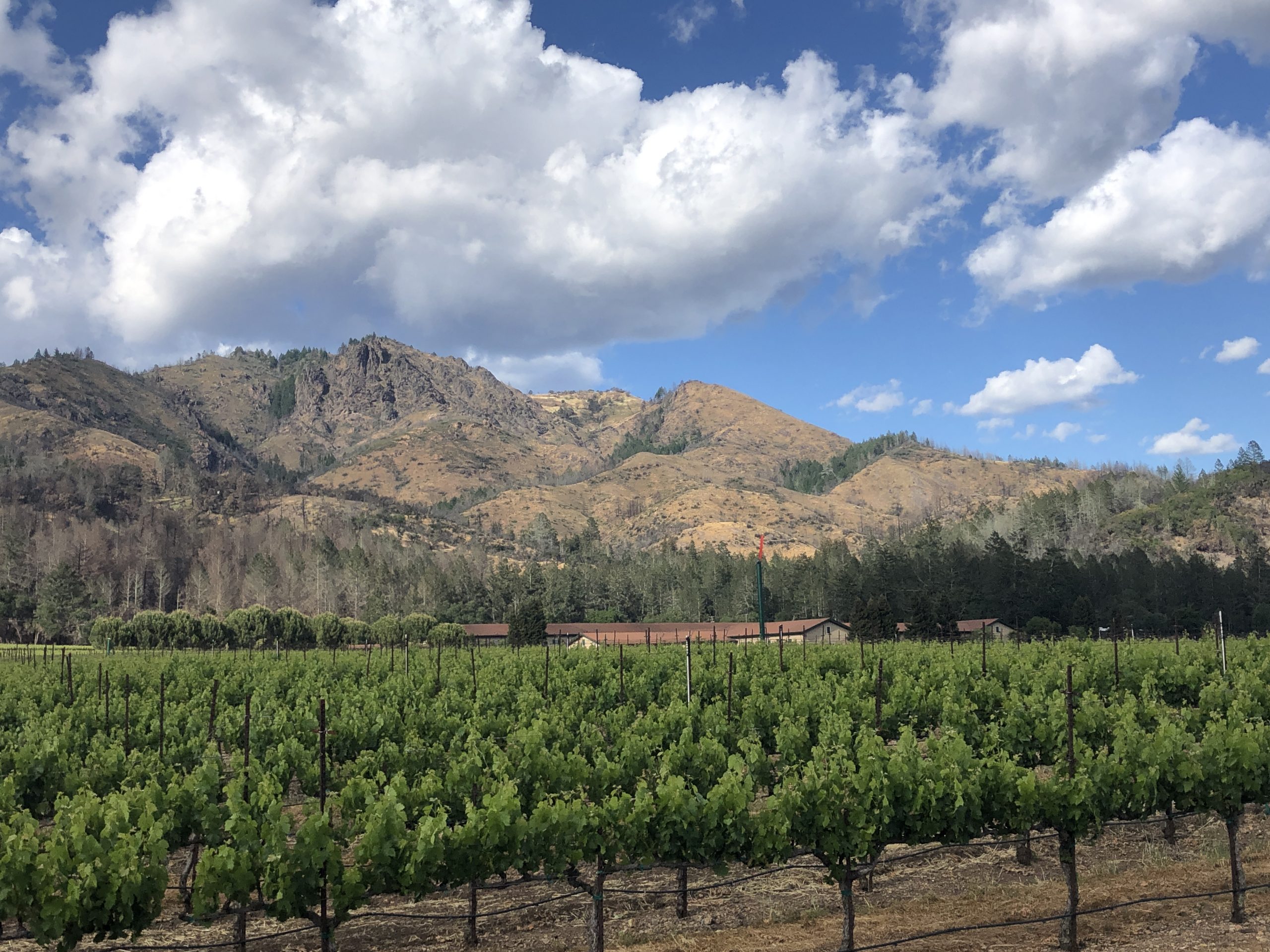 The clusters continue to grow and begin to tighten. Farmers reduce irrigation “stressing” the vines, which leads to more balanced flavors, sugar levels and tannins. This increases grape quality and leads to exceptional wine. 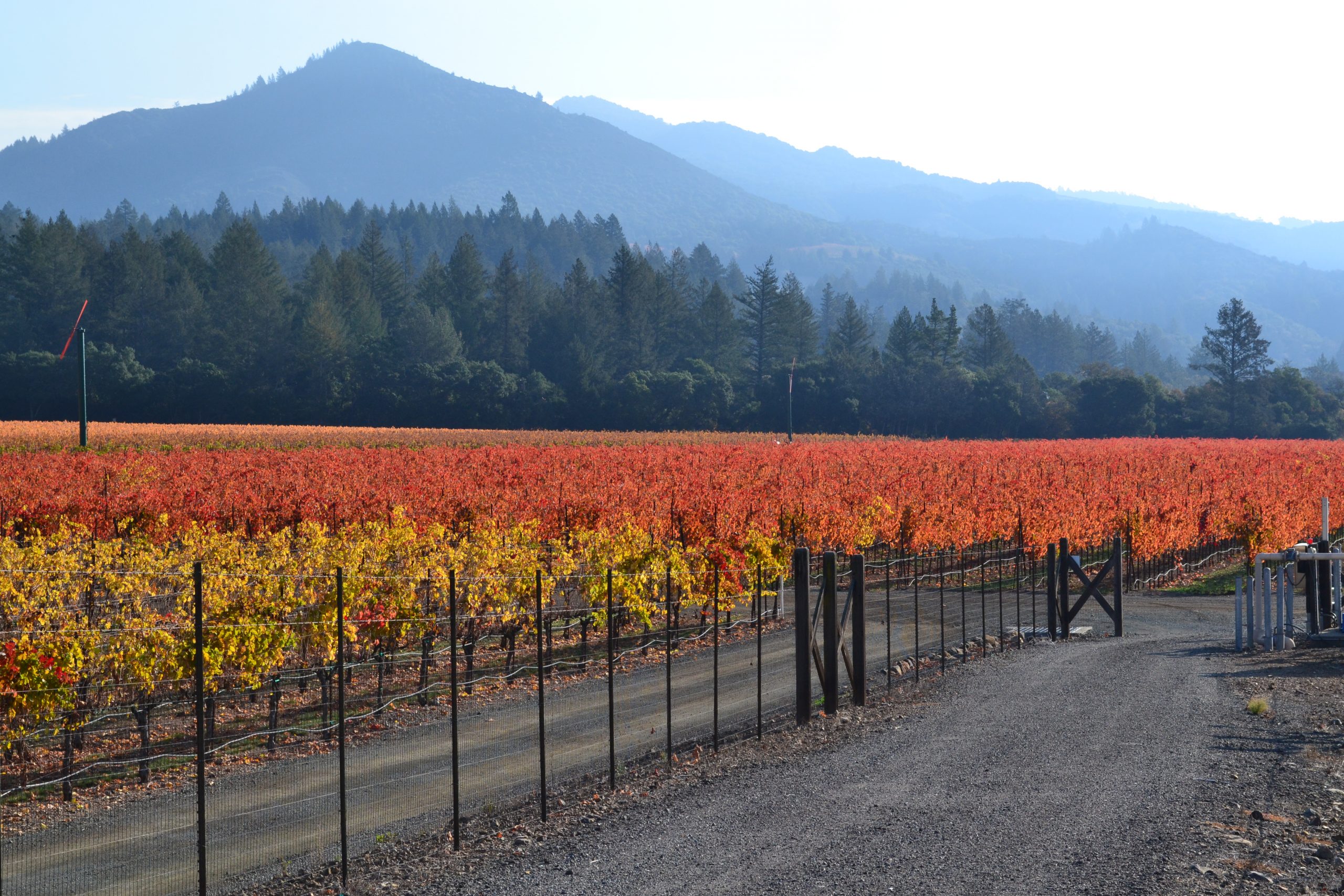 Harvest begins! The sweet fragrance of ripening grapes fill the air. Grapes are tested, shears are sharpened and bins are filled by the ton. It is a busy and exciting time for both winegrowers and winemakers. 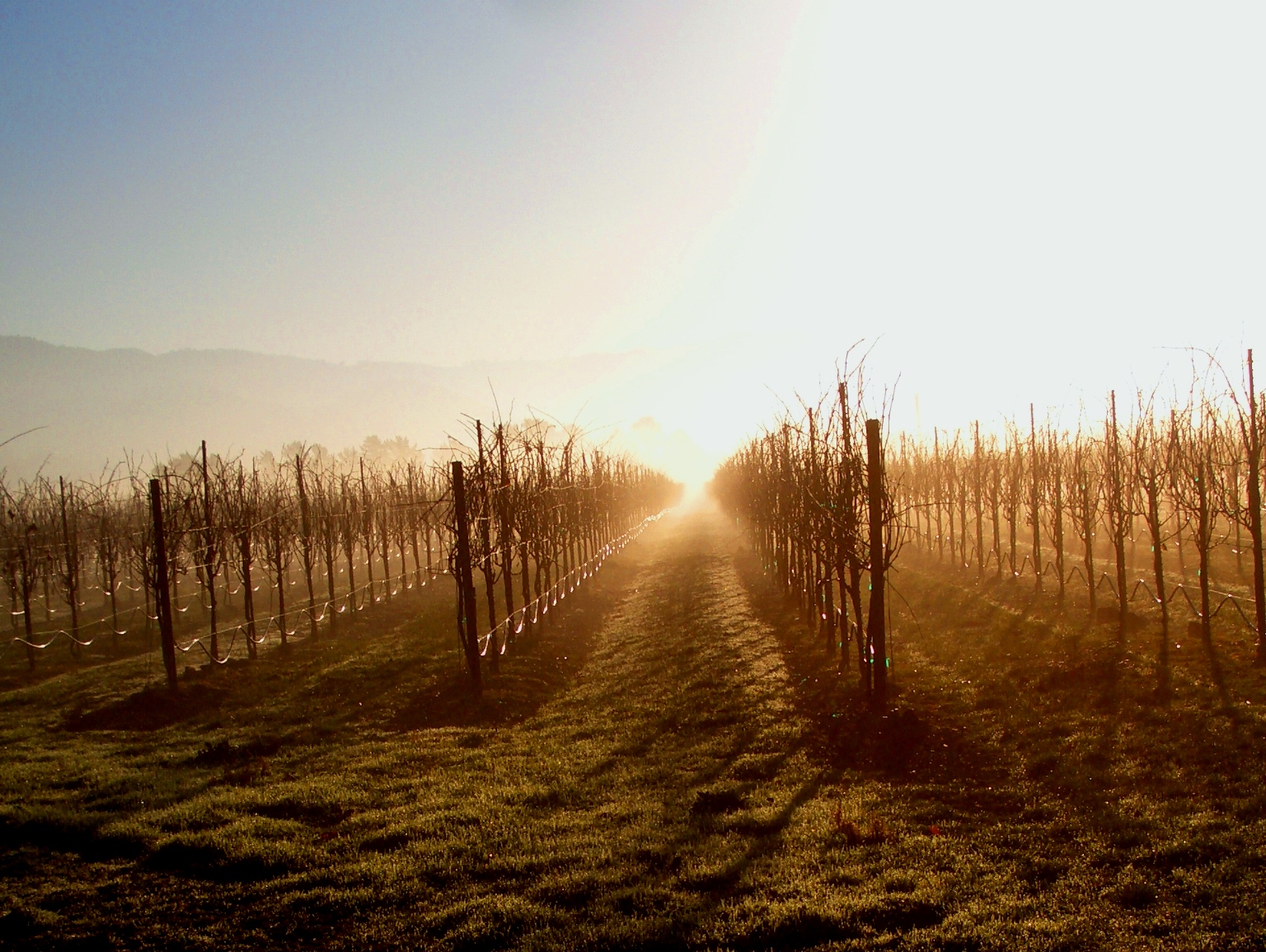 Preparation for winter rain begins. Cover crop seeds are planted and erosion controls are put in place. After the holidays the vineyards are filled with pruning crews who prepare each vine for the next growing season.

Sonoma County, with its varied microclimates and extraordinary topography, is a highly unique growing region. On any given day in Sonoma County, you might find yourself on a sun blanketed mountainside high above the fog line looking out over rocky cliffs and sprawling forests. You may wind your way down through the cool, lush valley floors peppered with ancient Oaks and tranquil creeks. Or hike out amongst the giants in the dense redwood forests that follow the ever-bending banks of the Russian River.

Takedown the convertible roof to smell the eucalyptus groves in the air across breezy, grass-covered hills on your way out to the oyster farms. Or keep heading due west from any point in Sonoma County and you’re guaranteed to find one of the most unique attributes of the region. Fifty-five miles of dramatic coastline, delivering cool evenings shrouded in soft fog. Perfect for resting the grapes after a hot sunny day.

St. Francis Winery & Vineyards operates according to the three pillars of sustainability:

Each of these factors are considered in our business decisions. The goal – to share amazing wines and delicacies from the heart of Sonoma County while preserving this mecca for future generations.

Drainage network for protecting against errosion 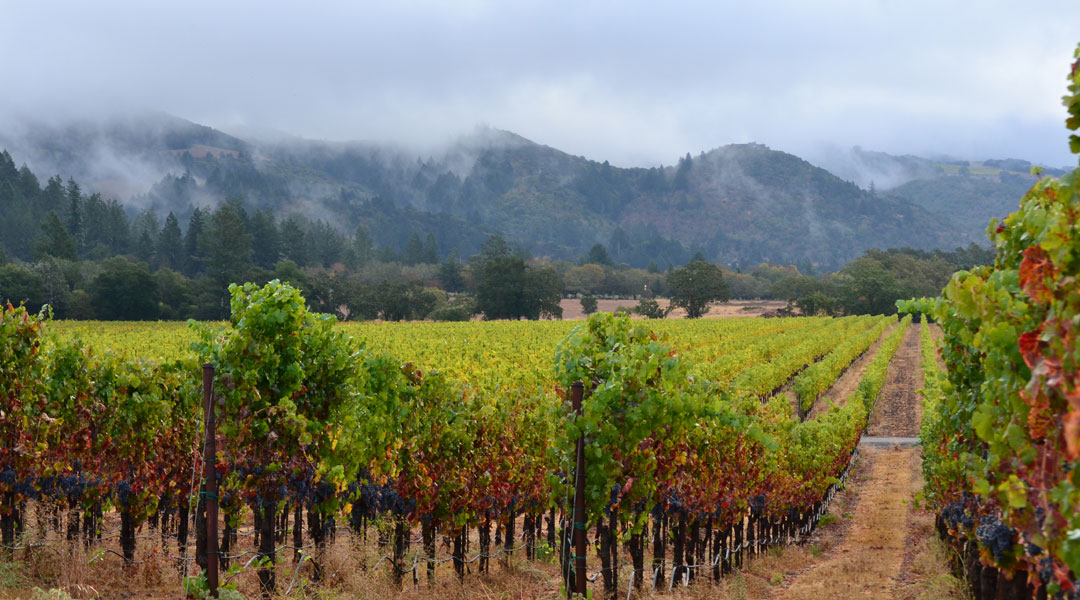 Many factors contribute to the quality and characteristics of a vineyard’s terroir. Soil structure and health are certainly of high importance. Climate, geography and even other plants can strongly influence the nuanced flavors and complexity of a wine as well. 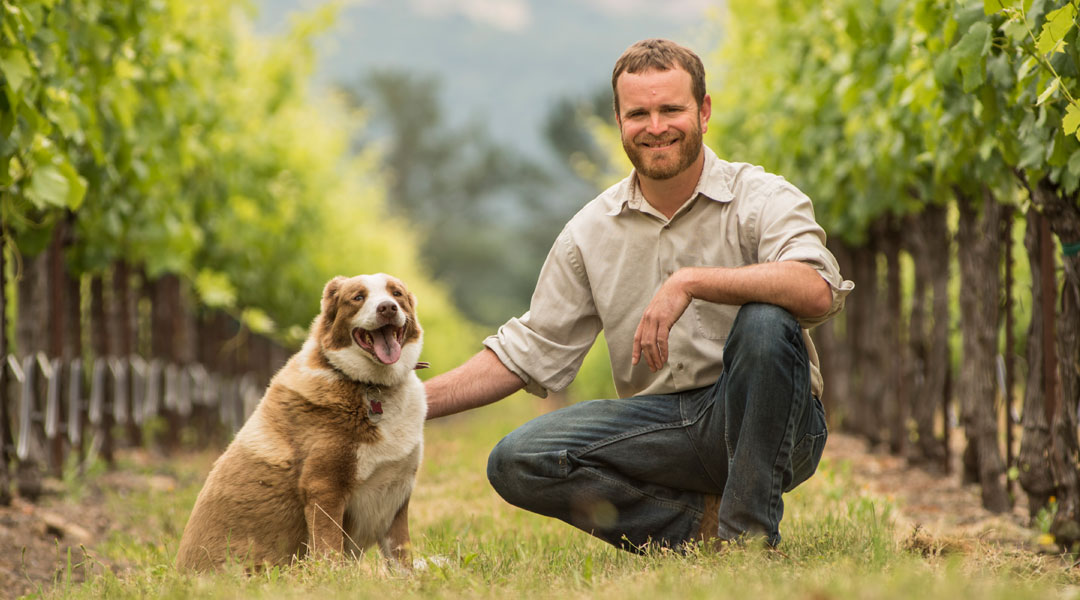 We grow most of the Bordeaux along the bench coming down towards the top half of the ranch. The rocky soil is perfect for cabernet and matches well with the mild climate of the Sonoma Valley. The bottom half of the ranch with the Los Robles soil series is a little deeper of a soil which is great for Chardonnay. This ranch is very cool for Cabernet making it one of it one of the last things we pick each year.

St. Francis Winery uses the Guyot training system to cultivate its vines and maximize grape yield. This traditional vertical shoot system was developed in France in the late 1800s by Dr. Jules Guyot. This technique keeps the vines from obtaining high shoot density which will result in inner-canopy shading. This shading prevents balanced leaf exposure to parts of the plant inhibiting photosynthesis which is necessary for the production of sugar.

Grapes will only produce off of one-year-old wood. The cordon, or “arms”, of the grapevine extend from the main trunk and are the part where additional canes will annually emerge in early Spring. Because of this, vine canes are pruned every winter while dormant, to encourage new growth.

Traditionally vines are cane pruned where the canes are cut back each year leaving two to four healthy shoots. These remaining branches will then be tied along trellis wires to train them for supporting new growth in the next growing season. Cane pruning typically produces and supports larger clusters.

Spur pruning which St. Francis uses for a number of its vines including Malbec, Merlot, Cabernet Franc, Petite Sirah and Mourvedre, is the practice of leaving one or two permanent (larger branch) cordons trained along the trellis wire. In late winter the canes are cut back to a small shoot known as a spur, from which new cans will bud.

Life-span of a Vine 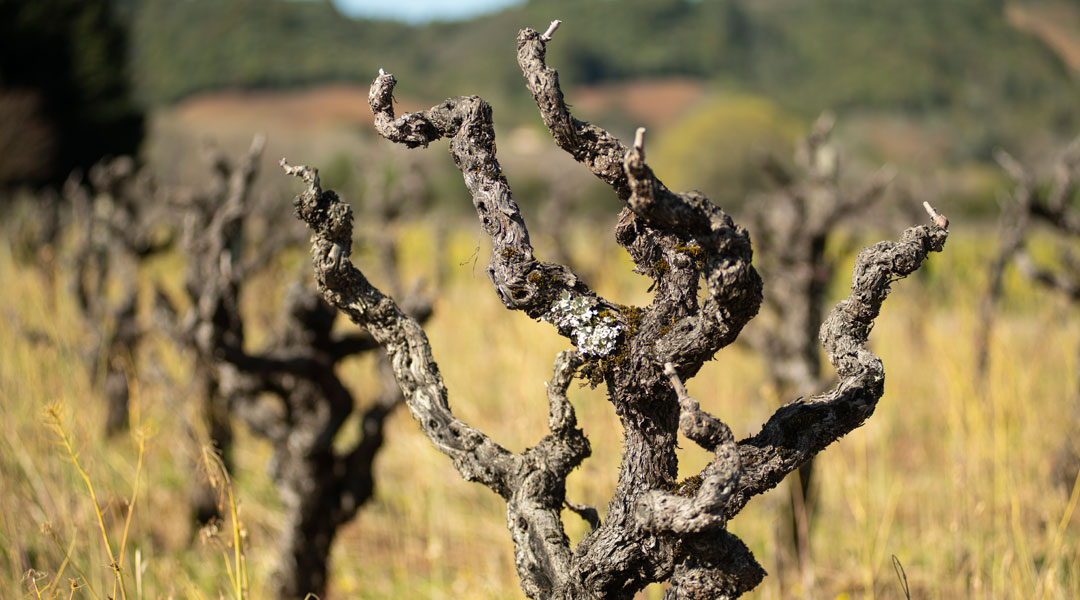 In the right conditions and if well cared for a grape vine can live for centuries. As of 2005 the oldest vine on record was a 235 year old vine planted in England. As a vine ages beyond 30 years its grape yield starts to recede. When 50 years have passed the plant enters its “twilight period,” at which time its cluster density will lessen even more. In many cases the juice sourced from these grapes will have a concentrated or more intense flavor, making them desirable for the production of specific styles of wine.

Read More
There are no guidelines or legal doctrines establishing what age a vine needs to be to be considered an old vine. We at St. Francis Winery use the term when a wine possess any fruit that has been sourced from vines 50 years of age or older.

Grape vines are self pollinating. Even though you will see many pollinating species of insect and bird throughout the property, their presence is not a direct influencer of fruit yield. Age of the vines and trellis design are the primary elements behind maximum production. However, a veteran vineyard manager will tell you, “uniformity, is the key to quality.”