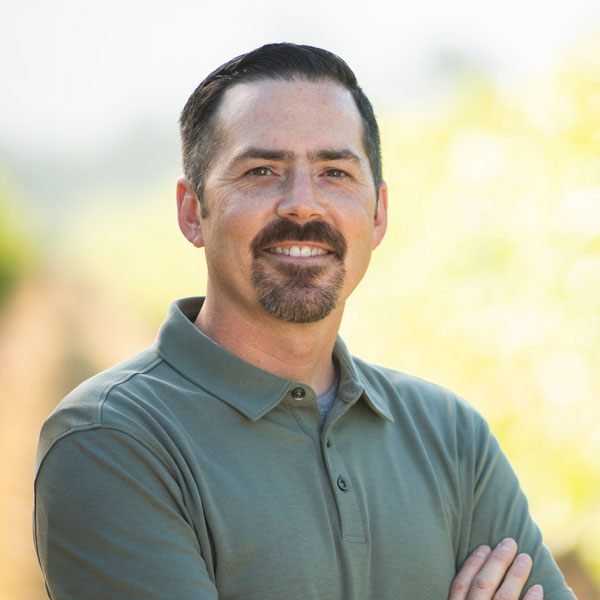 Chris Louton brings cutting edge knowledge and finely honed hands-on experience to his role as Winemaker. He joined St. Francis in 2013 after nearly seven years as part of the winemaking team at Napa’s Beringer Vineyards, where he focused on the luxury tier of wines and helped craft award-winning Cabernet Sauvignons and other Bordeaux varietals.

As Associate Winemaker at Beringer, Chris became a devoted fan of Cabernet Sauvignon from unique terroirs from Diamond Mountain,  Knights Valley and Alexander Valley, which gave him a special appreciation for Sonoma County’s diverse appellations. “The wines from Sonoma express themselves differently than the wines from Napa,” he says.  “They have their own unique brightness and great intensity. This is a spectacular place to make Cabernet.”

Making world-class wines wasn’t the career Chris originally planned for himself.  He was studying biology at UC Davis with every intention of becoming a veterinarian when he took a winemaking class his senior year. That class hooked him, and instead of applying to vet school after graduation, he went back to UC Davis to study enology and took a job as a harvest intern at Schramsberg Vineyards in Calistoga. Four years later, Chris left Schramsberg as Assistant Winemaker and having built their Cabernet Sauvignon program. He’ll tell you that “I didn’t choose Cabernet, Cabernet chose me!”

At St. Francis, Chris oversees production of our Cabernet Sauvignon and other Bordeaux varietals, as well as our popular Sauvignon Blanc. His goal is to create wines that are approachable, yet compelling, and always a true expression of Sonoma County. Under Chris’ leadership, St. Francis’ Bordeaux’s continue to receive the highest acclaim from national publications. In 2016, Chris was awarded the North Bay Business Journal’s 40 Under Forty, recognizing his leadership, talent and community involvement.